Transformationsis a unique dance project. It steps beyond preconceived ideas about the structural musical restrictions of dance.

It is not a show rehearsed for a three-week period before opening on the Edinburgh Fringe. It is a spontaneous performance in which musician, dancer and technicians meet. It is an unfolding of ideas and highly sensitive reactions between sound, texture, movement and colour. Ideally the show could be performed with a moment's notice at any point during the year.

It is a spontaneous, highly original and powerful creation. 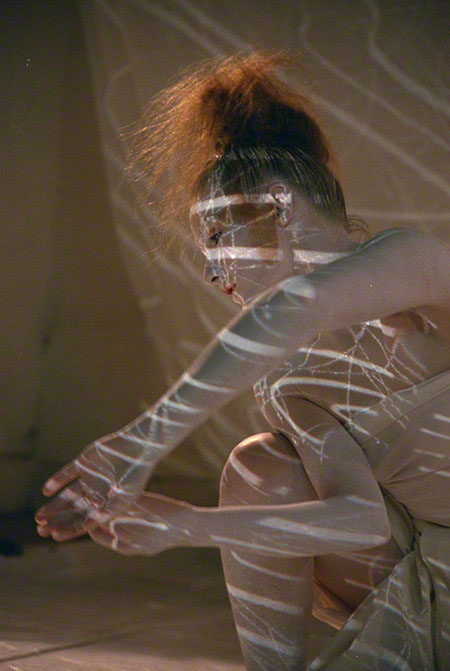 The strength of this work lies in the continuous development of ideas and methods between musician, dancer and technicians. During a performance they work together with an exraordinary understanding and interaction with the other, so they become a single entity, no longer separate performers.

Dance is often thought to be a solely physical experience exploring simply the limitations of the body. Transformations is unique because it develops philosophical teachings through the body. The principles of T'ai chi philosophical teaching are explored in a physical way. Illnesses of the body are restored through an expansion of the elemental side of the mind, in the form of dance. It is thus used as a purifying and cleansing medium. This is closely related to the elemental qualities of nature, its circular state of flux and creation of energy.

Lyn described how she removes the limitations of thought, and develops a sense of natural energy and impulse. So the restrictions of the mind and body previously associated with dance as an artistic medium, in western culture, are transcended.

Lyn stressed it was a positive expression in a worid threatened by ecological imbalance. "Each artist involved is working from the same basic premiss and inspiration but through developing and interpreting their own individual medium, an action is formed, which is responded to. This response then becomes a reaction and the process repeats, reflecting the circular processes of reaction and energy in nature."

I asked Lyn to describe how she prepares for a performance mentally, how she directs her movement.
"We are constantly moving. Taking air in and out of our bodies. We ue equipped with an amazing system of nerve and sensory facilities, so that we are constantly receiving and transmitting impulses. The body becomes the eye. I am drawn to natureÑ something that is constant, yet ever changing. Form and formless."

The performers as individual artists unite to create a whole new medium: "I am interested in the process of working. How we arrive at a point of performance. I see this as a conversation or communication between the artists, their mediums, and the audience."

A study rather than a performance, Transformations is an exploratory voyage through a series of vital environments. Each stage is beautifully initiated by huge slide projections and atmospheric percussion. From its embryonic beginning, where the first stirrings of amoebic life struggle to break out of a suffocating membrane, through to the emergence of limbed vertebra.

The five solo artists collaborating on the piece have created a feast of colour, texture and sound, drawing on elements of dance form, which is reflected in exacting movement, the chalked body of Lyn Denton and the strong elemental theme of the work. 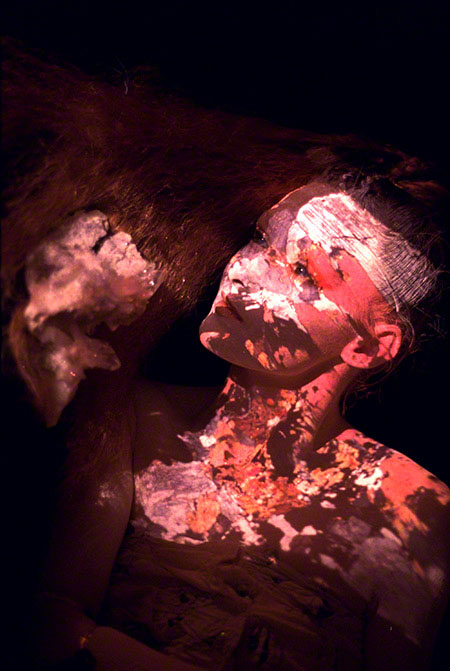 David Glass is better known for his staging of such comic grotesqutries as Gormanghast and Popeye than for learned discourses on academic subjects. But, with innovative Scottish performance group, State Theta, he's turned his hand to geology. I can't speak for the geologists, but from a theatrical point of view it turns out to be a voyage of discovery well worth taking.

State Thetas' past work, despite its undoubted visual impact has tended towards the nebulous while Glass's penchant for the plain silly can be irritating.

Here, the severity of the subject matter has inspired a focus and a clarity that provide some wonderful theatrical moments. These range from dancer Lyn Denton chipping away at rocks in an underground cavern, to her drifting through space (against a slide projection of stars), via a highly-effective fire dance.

For such a scientifically thorough piece, it's odd, but heartening that a very human centred almost mythical vision unfolds. As Denton holds aloft a small globe, the image of Atlas supporting the world an his shoulders is present. These images have an impact: It's hard to imaging such dynamic but simple shifts in scale and tempo in another medium.

The company is equally strong technically and musically, with some innovative and finely integrated slide and lighting effects, and atmospheric live and recorded accompaniment from Derek Houghton.

State Theta's strength lies in its willingness to develop the expressive possibility of all the theatrical arts. In The Quartz Cycle it has found an apt and liberating subject. It works.

The translucence and purity of quartz conceals its cruel metamorphosis through extremes of heat, pressure and attrition within the Earth's crust. The basic tension between its appearance and the process by which it is formed sustains this picturesque production by State Theta that will tour the Highlands next month.

State Theta have chosen to tell the story in the minimum of words with maximum visual flair, plus the great bonus of Derek Houghton's electronic score which has a tantalisingly minimalist-Celtic sound to it.

Dancer and choreographer, Lyn Denton, performs all 12 stages in a fluid mixture of mime, movement and dance.

As the Spirit of Quartz, her body occasionally remains at rest, creating an extra screen for enigmatic visual projections and performing tantalising silhouettes on the main screen to the rear.

Particularly effective was the section called Metamorphosis where crystalline quartz was shown to undergo structural changes under extreme heat. Dominating the stage is a double-ringed circle which contains between inner and outer circumferences, the elements of sand, stone, fire and water that go to create quartz.

Denton, finding movement equivalent to the various processes of geology, chemistry and geomorphology involved in its creation was by turns arresting, provocative, ethereal even comical in her depiction of sedimentary rocks breaking free with ear-splitting rumbles.

The Athenaeum's location, famous for its Queen Street roar, was of positive benefit on this occasion.

It is difficult to know how to judge The Quartz Cycle. Ostensibly there was nothing human to it - just a well crafted fusion of light, music and movement. Yet at times, it lifted the spirit and tapped effectively the cosmic sense of wonder which has so recently been stimulated by events deep in outer space.

Two years of devising between arts and science and preparing, researching and refining lie behind State Theta's latest performance project : The Quartz Cycle.

Two years, of course, would hardly register on the geological time-scale that attends the formation of quartz itself, but in terms of putting together an hour-long show ... And there you have one of the underlying themes of the piece: the terse. almost impatient way that humankind views time compared to the slow unfolding aeons of the geological quartz clock. 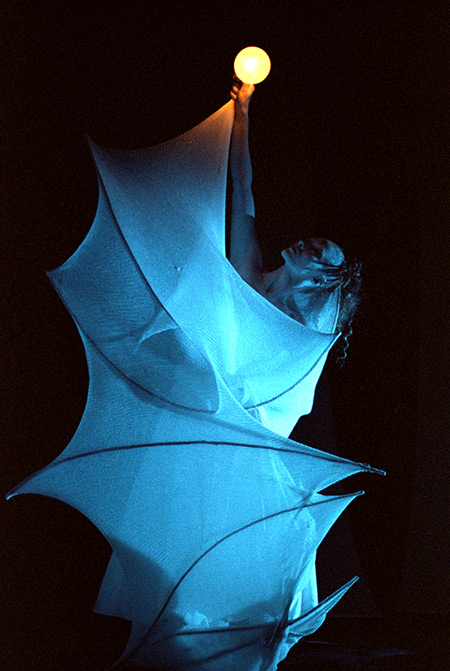 The piece is a reminder that, compared for instance to the hills, people have only been a part of the earth's history for a nod and a wink of time.

The Scottish landscape, with its diversity of rock formations, was the starting point for what subsequently developed into an ambitious collaboration between arts and science.

Graham Durant, curator at the Hunterian museum, Glasgow, was keen to find new ways of communicating scientific facts to the general public and when dancer / choreographer Lyn Denton a co-founder of State Theta - contacted him about research material for The Quartz Cycle, he promptly became scientific adviser to the project.

Mime artist, writer, and director David Glass also agreed to become a art of the collaborative process, working with the group on the spoken text and on the structure of the piece.

The end result is both beguiling and authoritative, seriously educational yet entertaining.

There is a rich, poetic texture to the mix of music, movement and visual imagery - the integration of slides and lighting effects is strikingly confident and imaginative which gives a sense of celebration to this description of geological evolution.

Briefly, the piece consists of 12 scenes which chart the different processes that govern the formation of quartz.

A taped voice offers a guiding commentary, dancer Lyn Denton creates both the circumstances and the "persona" of the changing quartz while Derek Houghton provides live music and Voirrey Watterson and Rob Norman overlay the scenes with slide projections and atmospheric light. When I saw the piece premiered, during the recent International Festival of Science in Edinburgh, it was in the ad hoc setting of the Royal Museum of Scotland.

We waited for the light to fade outside, then gathered in a semicircle of chairs close to the actual performance space. The white circle which contains the action was only a few feet away, It was very easy to make out the little details of the designs and of the movement.

The intimacy of it more than offset the limitations of the space. Like the best "hands on" displays in science museums these days, The Quartz Cycle makes you want to peer closely at what's happening, feel yourself thoroughly involved. An exhibition of photographs and background data accompanies the performance; it too is worth a look. 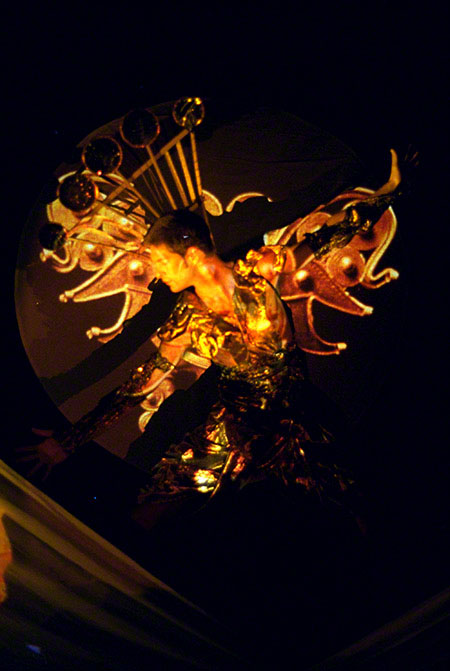